Our Lady of the Rosary

North Hinksey is the northernmost parish of the Portsmouth Diocese, whose boundary, like that of most Catholic Dioceses, is the old county boundary. Until a few years ago Berkshire extended to the River Thames, except in Botley, where the boundary became the Seacourt Stream. It wasn’t so long ago that the North Hinksey part of the Diocese was served from East Hendred, home of the old Catholic family of the Eystons. The Parish of North Hinksey has three church buildings, reflecting the geographically fragmented nature of the population. Each of those buildings was meant to be a focus for a local Catholic community made up of people who cared for each other as brothers and sisters in Christ, and whose witness to Christ and care for others spilled out into the wider community. The arrival of evacuees and their teachers from a Catholic school in Poplar in the East End of London was the beginning of a substantial Catholic community in Botley before our Parish existed. Over the next few years Mass was celebrated in make-shift venues, including the Bystander public house in Wootton, the Bear and Ragged Staff in Cumnor and the Women’s Institute in North Hinksey. Work began on Our Lady of the Rosary in 1953, on a piece of land gifted by a local Catholic. The Parish of North Hinksey was officially established on 1st January 1954, and the church was completed and dedicated later that year.

Patron Saint - Our Lady of the Rosary

Our Lady of the Rosary (also Our Lady of the Holy Rosary or Our Lady of the Most Holy Rosary) is a title of the Blessed Virgin Mary in relation to the method of prayer known as the rosary, whose origin has been attributed to a Marian apparition to Saint Dominic in 1208 in the church of Prouille. In 1571 Pope Pius V instituted “Our Lady of Victory” as an annual feast to commemorate the victory of Lepanto. The victory was attributed to Our Lady, as a rosary procession was offered on that day in St. Peter’s Square in Rome for the success of the mission of the Holy League to hold back Muslim forces from overrunning Western Europe. In 1573, Pope Gregory XIII changed the title of this feast-day to “Feast of the Holy Rosary”. This feast was extended by Pope Clement XII to the whole of the Latin Rite, inserting it into the Roman Catholic calendar of saints in 1716, and assigning it to the first Sunday in October. Pope Pius X changed the date to 7 October in 1913. In 1969, Pope Paul VI changed the name of the feast to “Our Lady of the Rosary”,[1] and it is celebrated as a memorial in the ordinary form. Prior to the battle of Lepanto, in thanks for the victory of the Battle of Muret, Simon de Montfort, 5th Earl of Leicester built the first shrine dedicated to Our Lady of Victory. Our Lady of the Rosary is the patron saint of several places around the world and María del Rosario is a common female Spanish name (colloquially abbreviated to Rosario or Charo). Rosario can also be used as a male first name, particularly in Italian. According to and thanks to Wikipedia click here for more

Where is the Church?

Please find a useful map below which highlights the exact location of the Church of Our Lady of the Rosary.

“Faith is to believe what you do not see. The reward of faith is to see what you believe.” 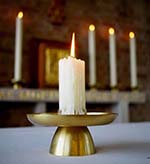